Along the way tens of thousands of curious people have asked us plenty of questions about our company, our history, our products and even our wrappers – from the strip of paper printed with “KISSES” (we call it a “plume”) to the bright new colors of the foil wrappers. And now we're answering some of your most frequently asked questions!

From our small beginning as a chocolate company in turn-of-the-20th-century Derry, Pennsylvania to the international candy company Hershey has become, our HERSHEY’S KISSES Chocolates have long been a major part of our products.  Here are answers to some of the most commonly asked questions about the history of HERSHEY’S KISSES.

When were KISSES Chocolates first produced?

HERSHEY’S KISSES Chocolates were first manufactured in 1907 by the Hershey Chocolate Company in Derry, Pennsylvania.

Have KISSES Chocolates been in continuous production since first being introduced?

KISSES Chocolates were in production from 1907 to 1942 and then not produced until 1947 due to rationing of aluminum during World War II.  During that nearly six-year period, Hershey retooled its KISSES production equipment in order to produce chocolate D-Rations for the US Military.

KISSES Chocolates have been in continuous production since 1947 and the KISSES Brand has added many flavors to the iconic product line to become one of the leading chocolate product brands in the world.

How did a chocolate product get to be called “KISSES”?

Like many success stories there are multiple versions of how KISSES Chocolate got its name and no one knows for certain which one is the truth! One story has it that the machines that extrude the KISSES Chocolates make a sound like a kiss. Another possibility is that “kiss” was a common confectionery term at the time to refer to a small piece of candy and that Milton Hershey was smart enough to protect his own product’s popularity by registering a trademark for the name “HERSHEY’S KISSES” in 1921.

Some of brand’s earliest innovations came in the area of product design and packaging, creating a springboard for telling the world about the quality chocolate that separated the HERSHEY’S Brand from its many competitors. From wrapping each KISSES Chocolate by hand to the paper plume that acts as a flag for each HERSHEY’S KISSES Product, the following are some of the most asked questions.

How long were KISSES Chocolates packaged by hand?

What do you call the paper flag or tag that sticks out from the top of the KISSES Chocolate foil wrapper?

That parchment paper strip is called a “plume”. Originally the paper plumes were also referred to as identification tags, possibly because they looked like miniature brand flags.

When the paper plume was first introduced in 1921, was “KISSES” printed on the plume?

No, the original paper plumes were printed with the “Hershey’s” name so customers were able to distinguish Hershey chocolate quality from that of the company’s competitors. Later in the 1920’s, “Kisses” was added to the plume. It wasn’t until the early 1990s, approximately 1994, that “KISSES” alone was printed on the paper plume, finally replacing the original Hershey’s brand name.

What was the original use for the paper plume that sticks out from the KISSES Chocolates foil wrapper?

Originally, the printed paper plume contained the brand name, “Hershey’s”, and the plume distinguished HERSHEY’S KISSES Chocolates from those of competitors. The highly visible paper plume replaced the Hershey’s tissue identification tag that wrapped the chocolate and was hidden inside the foil wrapper.

The paper plume was a brand ‘flag’ waving over the top of every HERSHEY’S KISSES Chocolate.

Does Hershey’s have a registered trademark on the foil wrapper, the paper plume, and the shape of KISSES Chocolate?

Yes. When the new packaging equipment added the “Hershey’s” paper plume to the top of the conical foil wrapper, it proved to be so distinctive in the marketplace that the Hershey Chocolate Company filed for trademark protection for the design. The registered trademark Number 0186828 was received in 1924.

In addition to our long history of concentrating on quality production, the HERSHEY’S KISSES Brand gets to add a bit of whimsey from time to time, treating our customers to more than just a great taste sensation. The following are some fun facts about HERSHEY’S KISSES Chocolates

How many HERSHEY’S KISSES Chocolates are eaten each year?

We are not exactly sure how many KISSES Chocolates are eaten each year, but we make 70 million of them each day! We suspect that a few are saved for tomorrow, but we will keep making 70 million KISSES Chocolates daily to be sure there are enough available for everyone!

What is the size of biggest KISSES Chocolate ever made and when was it made? 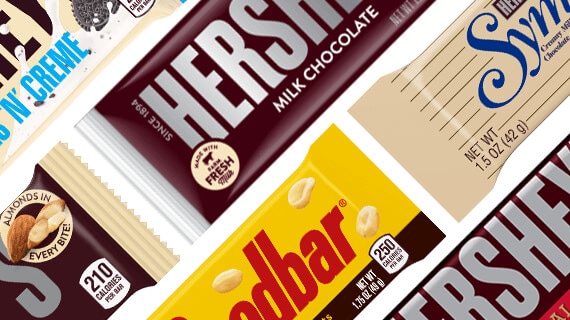 Make any day a little sweeter with your favorite treat—a HERSHEY'S classic. 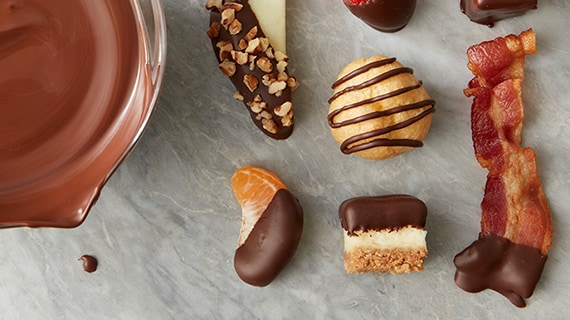 Get your bake on with these temptingly tasty recipes.

Sign up for our newsletter and get all the delicious updates, recipes, baking tips, and more sent right to your inbox.